Assessments are in, and our findings might surprise you! 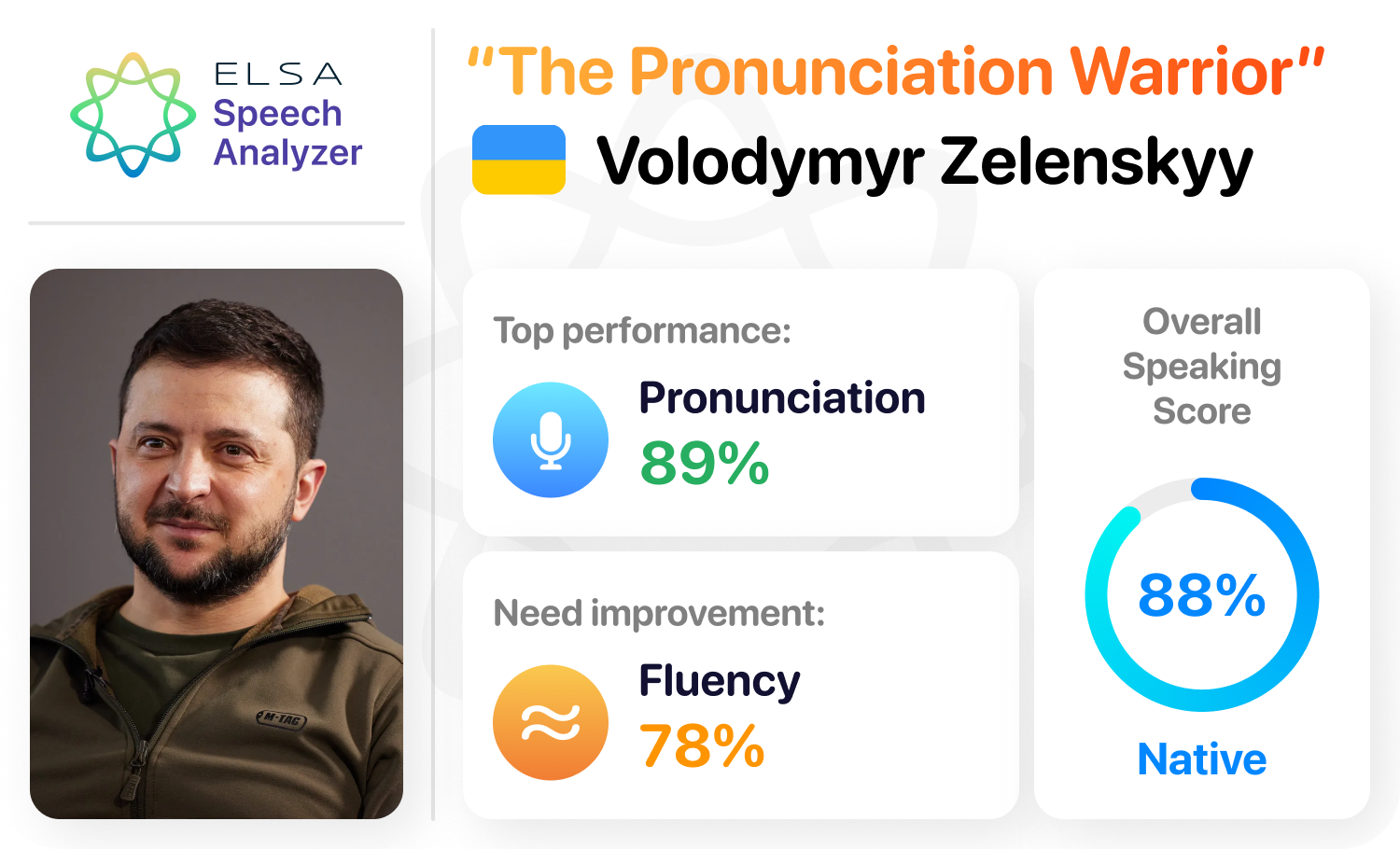 Ukrainian president Volodymyr Zelenskyy became a global icon in February 2022, as he led resistance efforts following Russia’s invasion of Ukraine. This former actor turned politician received international praise for his resilience and poise in the face of unspeakable adversity. We analyzed one of Zelenskyy’s speeches in English where he calls for international protest against the invasion of Ukraine.

Speech Analyzer gave president Zelenskyy a commendable overall speaking score of 88%. It highlighted the leader’s great care for grammar (95%) which was to be expected from a pre-written speech but more importantly a special focus on pronunciation (89%).

We noted a special attention being placed on the accuracy of the English TH sounds (/θ/, /ð/) which are notoriously difficult to produce for English learners. The president also received excellent marks for the distinction between the /i/ and /I/ sounds (e.g. “seat” vs “sit”).

Zelenskyy’s special care for pronunciation helped him convey the urgency of his plea to the international community in the early days of the war in Ukraine.

To provide support and humanitarian relief to people of the Ukraine, please donate: 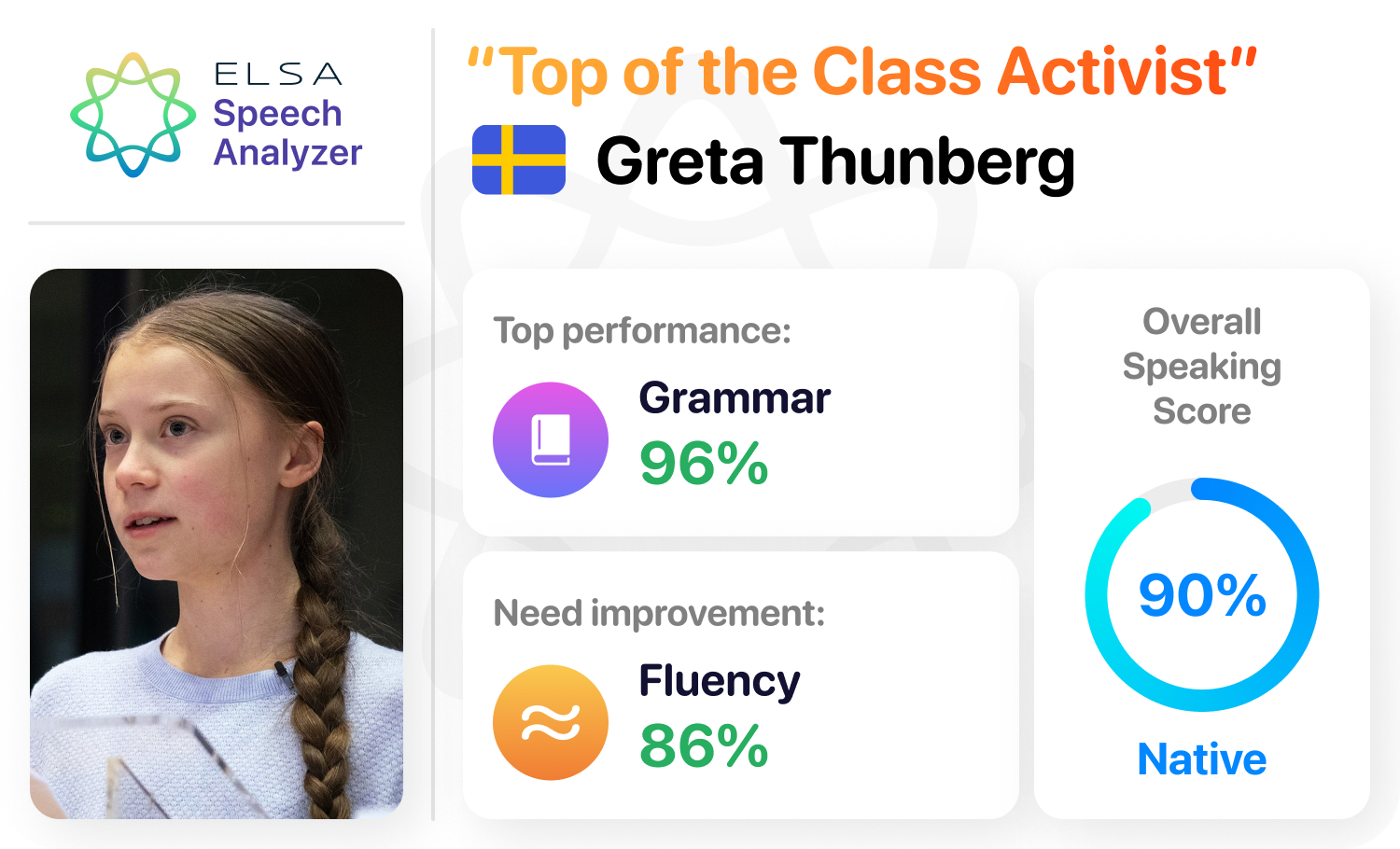 Swedish activist Greta Thunberg became known in 2018 through her relentless environmental advocacy on the international stage. Thunberg’s approach is one of direct confrontation. In only a few years, she’s challenged countless leaders on their environmental stance and embodied the anger of future generations for climate inaction.

Greta Thunberg displays all the traits of a learner who was fortunate enough to receive a high-level English education from a very young age – something we observe consistently in users from scandinavian countries. So it comes as no surprise that despite her younger age, she managed to reach the highest scoring category in Speech Analyzer with an overall speaking score of 90%.

Her artful use of grammar (96%) gave directness, strength and poise to her delivery. Her crisp pronunciation of ending consonant sounds and clusters also provided the bite required by the urgency of her message. Special mention also for her control of “r sounds” such as /r/, /ɝ/, /ɚ/ which can be notorious difficult for English learners to pinpoint accurately!

German Chancellor Angela Merkel has been a reliable and steadfast European leader for the last 15 years. As the first female Chancellor of Germany, she emphasized the need for international cooperation as Europe dealt with a financial crisis and the UK’s departure from the European Union in 2016.

In her 2014 speech to the British Parliament, Merkel drew a line in the sand as to Europe’s position on what would soon become the UK’s exit from the European Union, also known as Brexit.

Merkel’s fluency (91%)  is particularly impressive in this speech. Few hesitations, natural pauses and a good pacing helped her get the audience on her side despite the bad news she had to deliver to assembled British leaders.

If I had to highlight an area for improvement, I would probably suggest Chancellor Merkel focus on her intonation skills. Even if her pitch variation was within range, a greater prominence of content words such as main verbs, adjectives, adverbs, and nouns, would have given more flair and emphasis to her delivery. 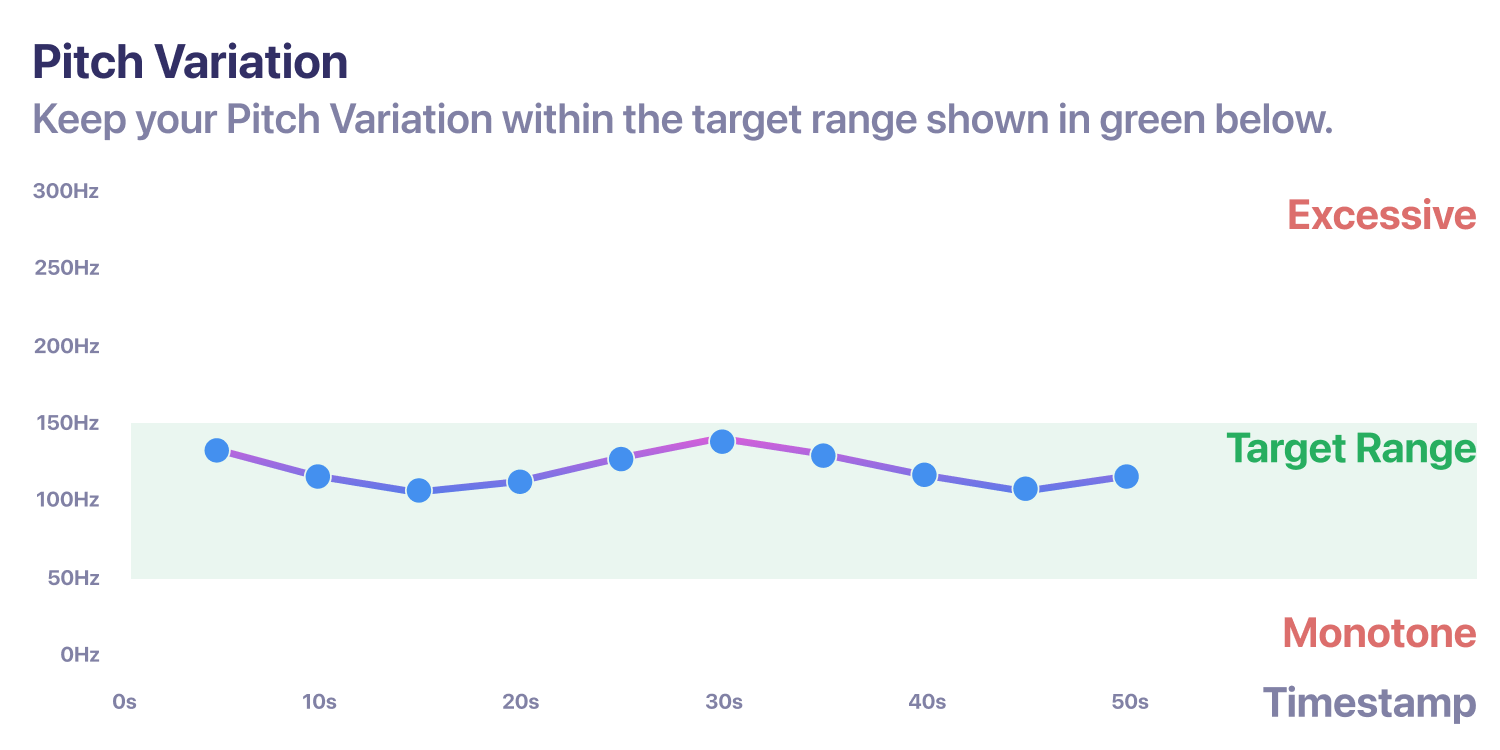 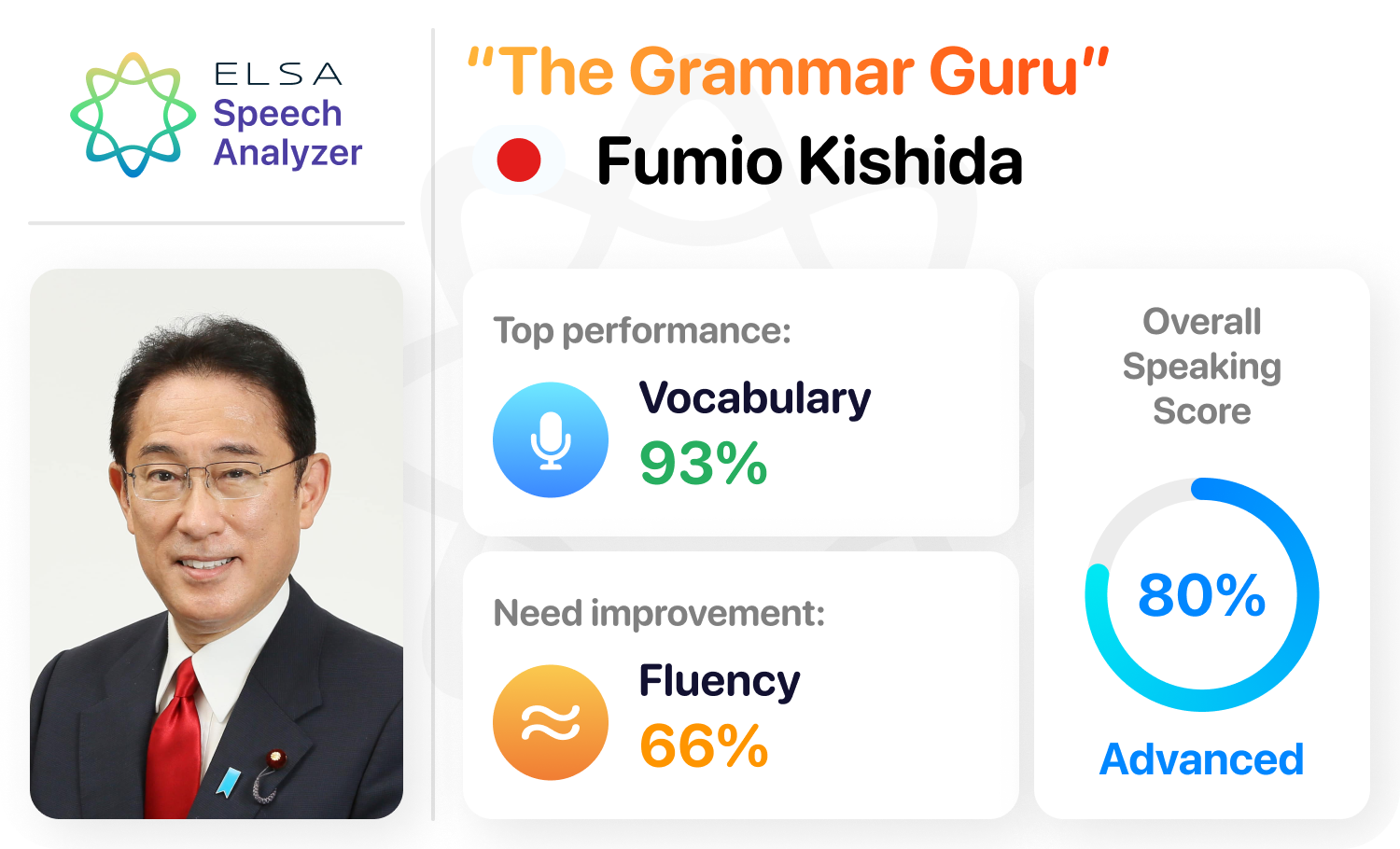 Fumio Kishida first served as Minister for Foreign Affairs and Minister of Defense before being elected as Japan’s Prime Minister in 2021.

Born in a political family, some of Kishida’s childhood was spent in the United States (he attended elementary school in New York City).

With excellent Pronunciation, Grammar, and Vocabulary scores (82%, 84% and 93% respectively), Prime Minister Kishida managed to get an overall speaking score of 80% qualifying him as an ‘Advanced’ English speaker as per ELSA standards.
Yet, similarly to many English learners from Japan, Kishida struggled with Fluency (only a 66% score there). It’s something we observe often. Too much concern for lexical and grammatical accuracy can have an impact on Pacing (around 102 words per minute in Kishida’s case, which is a little slow).

My advice would be to work on pronunciation skills that actually facilitate Pacing (linkage and dropped consonants for instance). Using more conjunctions in everyday speech will also help the learner to connect ideas more effectively which will in turn impact the flow of their speech. 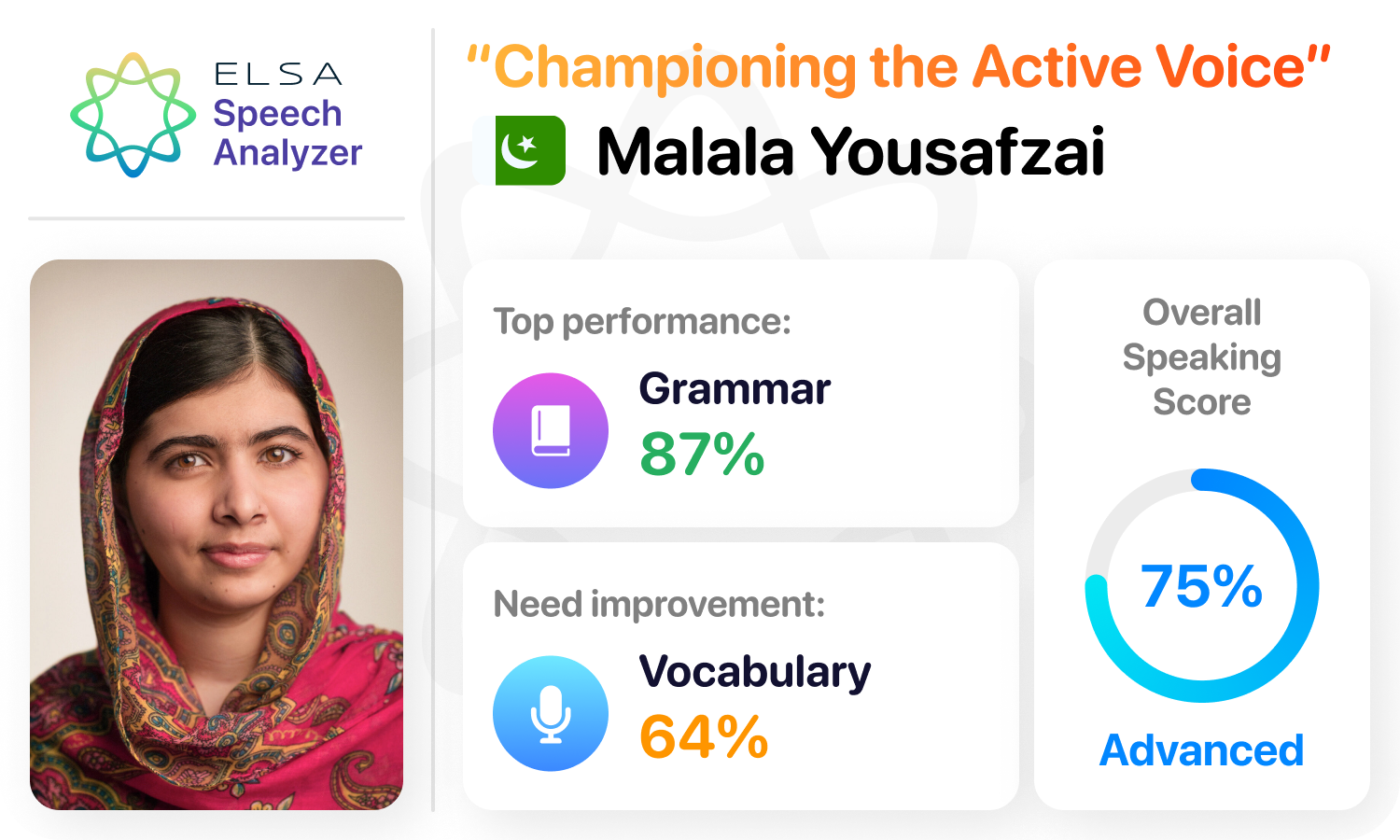 Malala Yousafzai is an activist for the education of women worldwide. Sadly, her continuous advocacy for the rights of women in Pakistan turned her into a target for radicals in her country. Despite a severe head injury suffered during an assassination attempt, Malala continued her relentless activism. In 2014, aged only 17 years old, Malala was awarded the Nobel Peace Prize. Now based in the UK, Malala Yousafzai runs a non-profit organization for the right to education worldwide.

For the purpose of this exercise, we analyzed Malala’s Nobel Peace Prize address which dates back to 2014. Based on this recording, Speech Analyzer gave her an overall speaking score of 75% which landed her in the ‘advanced’ category.

A particular highlight was her simple and effective user of grammatical structures such as relative clauses and conjunctions. Her consistent use of the active voice also contributed to the immediacy of her speech.

On the flip side, her use of advanced vocabulary was relatively limited. Only 5% of the vocabulary she used was above B1 on the CEFR scale.

That being said, I’m certain the increased frequency of her public appearances will have had an impact on her presentation skills and level of comfort in speeches and presentations. 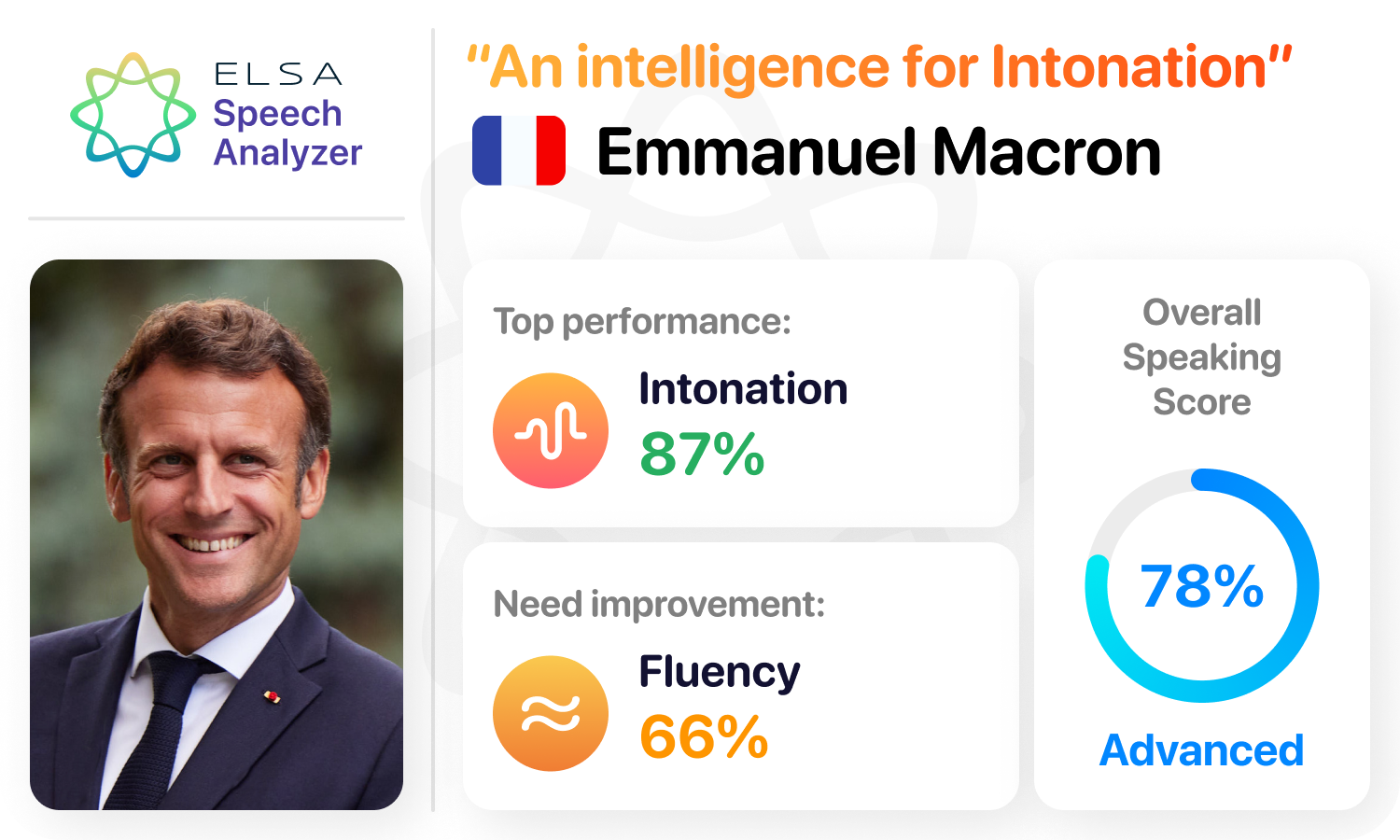 Emmanuel Macron was elected as President of the French Republic in 2017. His leadership saw France turn its focus toward a much needed  renewable energy transition. He advocated for more equitable labor policies and retirement packages for the French people, and led France through the Covid-19 pandemic and the subsequent vaccination rollout.

In this speech delivered in front of the US Congress, President Macron tells American politicians that international cooperation and free trade are not mutually exclusive. He also stressed the importance of global security and of the need to act on the climate crisis.

Macron’s Vocabulary (91%) and Intonation (88%) is what contributed to the success of this important speech. By choosing his words with care and emphasizing them correctly, the French leader managed to achieve an impactful delivery in front of a crowd of native English speakers.

His overall score was affected however, by a 66% Fluency score and 64% Grammar score. We feel that a greater care for function words such as conjunctions, prepositions, and articles could have an impact on the clarity of President Macron’s ideas in English. 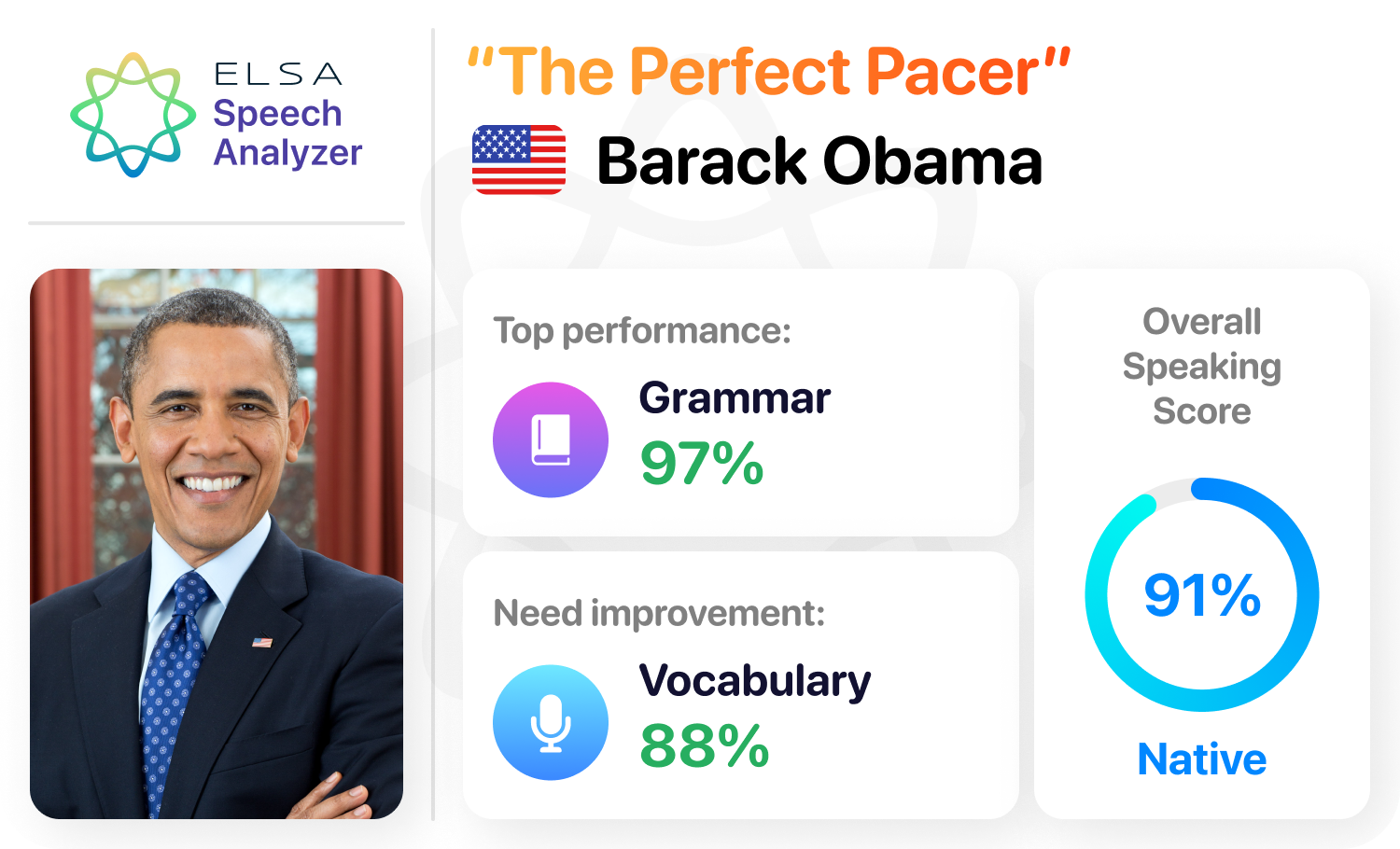 If I asked you to close your eyes and think of a politician, it’s very possible that Barack Obama’s picture is the first one to come into your mind. Revered by some, criticized by others, Obama’s legacy on the world stage is undeniable. The 44th and first African American US President (2009-2017), was born in Chicago and trained at Harvard Law School before being elected as a representative for Illinois in 1997.

Obama’s main achievements include the Affordable Care Act and the creation of several economic stimulus packages during the 2008-2009 recession.

For linguists however, Barack Obama is considered a benchmark for speaking proficiency in American English. So why did he only score 91% on Speech Analyzer? Good question!

In his address to the nation at the 2020 DNC convention, Obama made sure to simplify the language in his speech to ensure that all Americans understood the importance of the upcoming election. This has impacted his vocabulary score slightly (88%). But this choice served another purpose…

“Tonight, I wanna talk as plainly as I can about the stakes in this election.”
This is the craftsmanship of a true master at work. We have a highly educated politician choosing to adjust the level of his speech so that his ideas may be better understood. To me, that is the mark of a true public speaker.

I always make my English students listen to Obama. Whether you agree with his ideas or not, there is no denying that he has a stunning control of English. He balances flow and linguistic accuracy with ease and reliably leans on important words. His vocabulary and grammar skills are also enhanced by a natural flair for a modern English pronunciation standard that is accurate, yet unassuming.

to establish a personal connection with his audience

Every English learner could benefit from listening to Obama speak.

Well? What are you waiting for?

Students of any age groups learning new languages in new cultures are often self-conscious. However,…

Drum roll… Two exciting announcements. ELSA in Real Life (biggest improvement in our product ever) & Application opening for ELSA VIP Membership (FREE to get but has a value of $1,000)!

Hi there, This is ELSA, your world’s best English Language Speech Assistant app powered by…

A guide to Lunar New Year 2023 around the world