Calling all football fans! After what feels like the longest 4-year wait, the 2022 FIFA World Cup is less than one month away! Over one million fans are expected to attend the 64 matches in Qatar, with more than 3 billion people tuning in from across the globe, to keep track of one of the most prestigious tournaments in the world.

Of course, for those of us working behind an English speaking app, the aspect most intriguing to us is that the World Cup will consist of 32 teams representing speakers of approximately 20 different languages! The official languages of the FIFA World Cup (English, Spanish, French, German, and the most recent addition, Arabic) are native to over one billion people, but still – not everybody knows these languages. And what happens during a match between teams from Japan and Costa Rica, with a referee from the UAE thrown into the mix?

The referees seem to be the ones in most need of the ability to communicate with the players, each other, and in some cases, the onlookers. In preparation for the World Cup, referees, assistant referees, and other officials attend a series of seminars conducted mostly in English, putting their knowledge and skills of the game to the test, as well as their English proficiency. With English being the most widely spoken language in the world, FIFA requires that referees and other officials speak English and one other official language. This way, international refs are able to communicate with each other and with players who have at least some limited knowledge of English.

Another requirement for refs: being able to run approximately 6 to 8 miles in one match! Phew!

Let’s take a look at a few of the big names in football around the world, and the languages they speak.

Lionel Messi has become a household name thanks to his record-breaking talent on the football field. Hailing from Argentina, his native language Spanish allowed him to seamlessly transition to a life in Barcelona, where he also picked up Catalan, but mostly sticks to Spanish in his interviews. English, however, has not proven to be a necessity for Messi, though he has put some time into learning it. Check out this video of him pre-interview, discussing his knowledge of the language

Takefusa Kubo, the “wonderkid” from Japan at only 21 years old, is known to speak fluent Spanish in addition to his native language, Japanese, due to time in his young career playing on various teams throughout Spain.

Lastly, Cristiano Ronaldo, another household name around the world, can hold a conversation in his native Portuguese, as well as in English, Italian, and Spanish, thanks mostly to his time spent on teams throughout the respective European countries. In fact, Ronaldo playfully spoke of how he acted as a translator for rivals (and friends off the field) Messi and Brazilian player Neymar at the FIFA Ballon D’Or awards in 2015.

So now we know that the referees are required to speak English, but the players are not – and that’s okay, because the whistles, hand gestures, body language, and colored cards are mostly understood by all. Red and yellow cards were actually invented for the very reason of overcoming language barriers by Ken Aston, an Englishman refereeing a game between Chile and Italy at the World Cup in 1962. The uncharacteristically violent match, later dubbed as the ‘Battle of Santiago,’ saw players being dragged off the field by security after a language barrier prevented Aston from successfully communicating their dismissal. It was because of this match that Aston came up with the use of red and yellow cards as means to communicate a referee’s decisions to spectators and players both on and off the field. 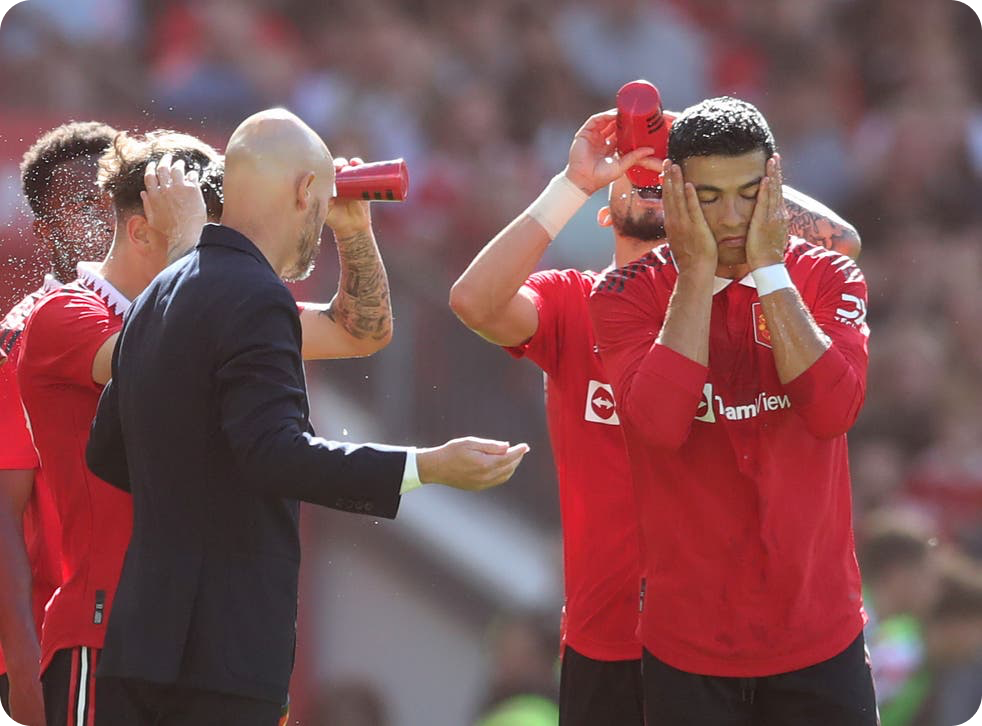 It is also rumored that many referees take it upon themselves to become well-versed in different swear words. They want to ensure that players don’t get away with verbal abuse!

Finally, regardless of the languages players do or don’t speak, there are certain commonly-used football terms that most players and fans should be familiar with in English. These words may include (but are not limited to):

And the most important term that needs no definition:

So it’s true, as many say, that football really can be considered a universal language. In the end, English or other verbal communication is not an absolute necessity when it comes to FIFA’s World Cup tournament…

Because football can speak for itself!

Do you agree? Or do you believe that referees and players should all be able to communicate verbally? Let us know your thoughts in the comments!

Not all practice is created equal // World Cup 2022

The 2022 FIFA World Cup is finally on the horizon!  In anticipation of the most widely viewed single sporting event in the world, we got to thinking: how many hours of training are put in by World Cup athletes to prepare for this prestigious football tournament?

Yup, you guessed it – A LOT!  Lionel Messi, arguably one of the greatest footballers to grace the field, once said:

So it’s clear – most professional athletes have dedicated countless hours of practice to their sport. For World Cup players, this makes sense; most of them discovered their athletic abilities at a young age, and put in the time and effort over the years to become the GOATs (English slang for “the greatest of all time”)!

So how can we relate this to our desire to master our English skills? Does this mean that it’s too late to excel in English if we don’t have 17 years to practice?

We’re so glad someone asked, because the answer is: absolutely not, especially with the help of technology like ELSA!

Through our research, we learned that in trying to reach our goals of acquiring a new skill, all practice is not created equal. When we practice deliberately, we don’t really need all those years of practice (and we must say – we’re pretty happy about that, because we definitely don’t have 17 years to wait)!

So what exactly is deliberate practice?

Simply put, it’s a highly structured way of learning in which you focus on the goal of improving your performance. With deliberate practice, you can learn a new language, take up snowboarding, or start playing the trumpet (just make sure no one is home), no matter how late in life you start.

There are 4 main components that make up deliberate practice, as listed below. ELSA makes it easy to follow these 4 steps in ensuring that you get the best, most efficient practice possible:

ELSA sends you daily reminders at a time you choose to keep you motivated to practice every day. Busy? Don’t worry!  Bite-size lessons allow you to practice just enough English to ensure progress, even when time is getting away from you.

After signing up for ELSA, you will first complete a short assessment test to determine your proficiency level. ELSA then acts as your personal English coach, creating a personalized learning plan based on your current skills, progress, and goals. This ensures that you’re getting exactly what YOU need out of your English practice.

With ELSA’s interactive AI technology, you’ll receive feedback immediately on your pronunciation, stress, or intonation, which you can then apply to your practice right away. You can also visit the AI dictionary and practice your pronunciation of any word or phrase you choose!

With ELSA, you’ll find lessons spanning topics from travel, job interviews, cultural holidays, and so much more, focusing on the specific pronunciation skills you want to develop. This variety of lessons makes practicing with ELSA interesting and fun while still achieving the goal of repetition.

As in any field, it takes time, dedication, commitment, and effort to excel, and World Cup athletes are a prime example. But we can’t all be professional athletes (though, pretty sure we thought we’d be qualifying for the Monkey Bars event when we were 7). So for the rest of us, we do the best we can! This means working smarter, putting in the time that we have, feeling the confidence in our skills soar to new heights, and — if improving English is your goal — using ELSA to help get us there.

Drum roll… Two exciting announcements. ELSA in Real Life (biggest improvement in our product ever) & Application opening for ELSA VIP Membership (FREE to get but has a value of $1,000)!

Hi there, This is ELSA, your world’s best English Language Speech Assistant app powered by…

COVID to accelerate the industry trends 2020 has been a year of uncertainty and adversity;…

<strong>How learning English is just like baking a cake…</strong>

Tech Layoffs in 2022: Six Skills To Future-Proof Your Career

16 ways to say ‘Thank you’ in English this Thanksgiving

“English wears Prada” – Improve your English by listening to these celebrities