You’re telling a friend to marry a merry girl named Mary. What would you say? 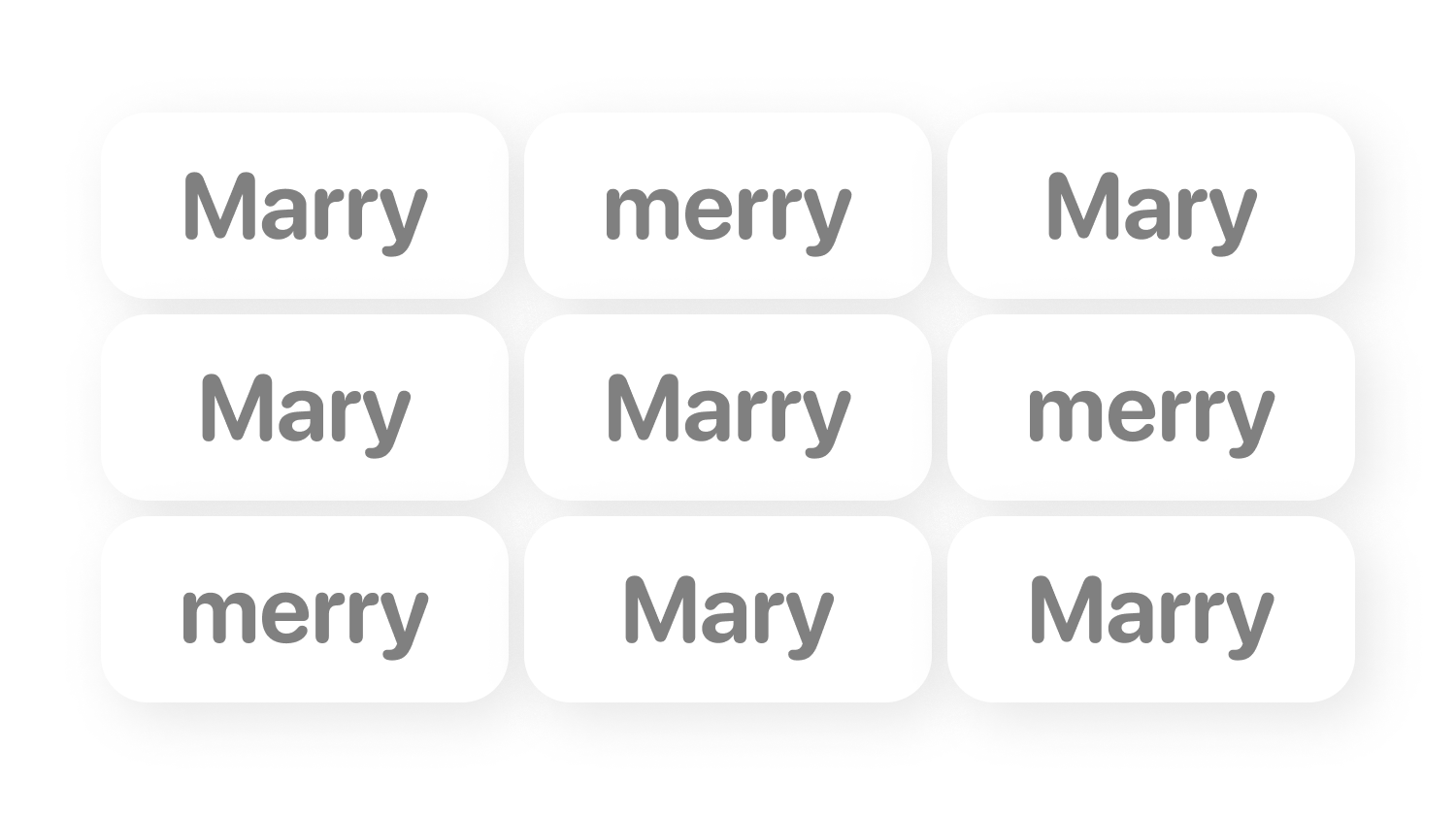 Now think about your pronunciation. Did you pronounce any of these three words differently? Or is this strange yet grammatically correct sentence really made up of three different words that all sound exactly the same?

Well, that’s a difficult question to answer. Why? Because it depends on who you ask!

According to a Harvard dialect study of 30,000 American English speakers, nearly 57% use the same pronunciation for all three words, and, without context, would definitely garner some confused looks in their direction if they said it out loud. Trust me, I just tried it! Conversely, ask 17% of Americans – most of whom are concentrated in the northeast of the US – and they’ll tell you that “marry,” “merry,” and “Mary” all sound different! So what about the remaining 26%? According to them, two of the words sound the same, while one of them does not.

Many people refer to the American accent as one that broadly extends across the entire span of the United States, but social scientists estimate that there are actually 24 or more American accents or dialects across the country! Are you familiar with some of them? Let’s dive into some of our favorites, and discuss why ELSA focuses on staying neutral.

Accents from the Northeast corner

Accents heard in the northeast and New England has a few variations specific to the different states in the area. Two of the most prominent accents here are:

Not sure what that means? Don’t worry – this classic slang that’s most closely defined as another way to say “awesome” is really just a Boston thing! Amongst other phrases unique to this city, as well as vowels that make “marry,” “merry,” and “Mary” all sound different, the Boston accent also stands out with its characteristic of dropping Rs, most often when an R is at the end of a word or followed by a consonant or -er. Here’s a popular phrase often used to put the Boston accent to the test. Give it a try!

A great example of the famous Boston accent is the movie “Good Will Hunting,” starring Matt Damon and Ben Affleck, both of whom hail from this northeastern city. Check out this scene to hear their accents on display:

Not far from their neighbors in Boston, people with a typical New York accent also tend to drop their Rs in similar places. However, they’re probably most known for their tendencies to speak with extra flair, particularly when it comes to elongating vowel sounds and adding ‘w’ sounds to words with vowels ‘a’ and ‘o.’

Want to hear more of the New York accent? The popular TV show “The Sopranos” is a great place to start! Careful, though – this video is NSFW (not safe for work)!

But wait! Before we leave, let’s not forget the famous phrase commonly used by New Yorkers that now occupies its own street sign as you exit Brooklyn

Now, it’s time to take it down south!

Known as the largest American regional accent, the southern accent has many distinguishable variations, including the Appalachian, Texas, Cajun accents, and more, that extend across several states in the American south. While people sometimes drop their Rs in this region too, vowel length is a prominent characteristic throughout many southern accents, whether it’s elongating vowels or turning diphthongs into drawn-out monophthongs:

Have you ever heard Britney Spears speak in an interview? Britney’s southern accent was cultivated in a small town in Louisiana. How about Matthew McConaughey? A true Texan, Matthew speaks in his Texas accent with pride. Listen to him give a motivational speech at the University of Houston:

If you’re not sure what this sounds like, the popular movie and series “Fargo” is a great example of the accent, which spans Minnesota, North and parts of South Dakota, northern Iowa and Wisconsin. With a strong Scandinavian influence, people in these regions tend to enunciate their R sounds, and pronounce ‘a’ and long ‘o’ sounds using single-tone pronunciation and drawn-out monophthongs, amongst other differences, of course.

They also pronounce some long ‘oo’ vowels with a shorter ‘u’ sound (root → ruut).

Check out this clip for a better idea!

These are just a few of the many different variations of the American accent. Now, let’s dive into the accent taught by ELSA:

Spoken by a large number of Americans, the ‘general American’ accent, also sometimes referred to as Midwestern, standard American English, or newscaster English, is more neutral and recognized as American, yet it doesn’t have characteristics or features specific to any particular area or region. It’s the accent spoken in much of Hollywood, mainstream media, and by many national news broadcasters around the country.

For one, this accent is spoken by a majority of Americans and is what most English students request to learn. Its prominence in movies, news broadcasts, and other mass media has added a level of familiarity that English students feel towards this neutral version of American English. The fewer variations in vowels and unique distinctions also require less effort for people to learn or understand.

People who speak like they’re from California are thought of as “valley girls” or “surfer dudes.” Check out this hilarious skit of Californians on Saturday Night Live for an exaggerated idea of this stereotype:

People who speak like they’re from New York might be viewed as rude, full of attitude, or even related to the mafia!

How about those from the South? Well, a person with a southern accent might automatically be considered a hillbilly, a cowboy, or simply unintelligent.

Sadly, it doesn’t stop there. Studies have also linked strong regional accents with lower wages around the world. While it’s incredibly unfair that these stereotypes exist, the simple fact is that they do, and not just in America; biases against regional accents exist in countries everywhere.

Take Stephen Colbert as a real-life example of how these stereotypes come into play. The comedian and talk show host once famously spoke of how he trained himself to eliminate his southern drawl, adopting a neutral accent instead:

Check out this clip to hear Stephen Colbert’s neutral American accent as he interviews the fun and witty Jennifer Lawrence (bonus: a few minutes in, you will also hear Jennifer Lawrence bring out the southern accent she had as a young girl raised in Kentucky):

Perhaps one day we will evolve as humans in learning to determine people’s characters through their actions rather than their accents. After all, accents are beautiful – even all the different variations across the United States alone! However, for the sake of easier communication, more familiarity, and fewer stereotypes, it seems that most students will continue to request the general American accent – and ELSA will continue to be there to guide them.

Wherever you are in the world, accents have probably come up frequently, whether you’re meeting someone new, learning a new language, or simply having a conversation:

So, why do people spend time and money on training to reduce their accents?

First, it’s important to note that accent reduction is never about losing your cultural heritage or eliminating a natural accent. The accents are beautiful! However, you may find that having an accent that’s often misunderstood can negatively impact your life if it’s preventing you from reaching your goals.

For those interested in accent reduction, the ELSA Speak application (English Language Speech Assistant) helps you greatly improve your English speaking and listening skills using advanced AI technology with immediate, personalized feedback. The technology works hard, but ELSA keeps the goal simple — clear and articulate speech that can propel you forward in a multitude of ways:

Communication skills are a key element to succeeding in the professional world for many people. Clear and articulate communication can help in job interviews, and improve negotiating and networking skills to help make new contacts, close deals, and get those promotions! Time is saved when information does not have to be repeated, and fewer misunderstandings between employees and clients or supervisors lead to greater efficiency and effectiveness.

If you’re planning to travel to the U.S., England, New Zealand, Australia, or even one of over 65 countries that recognize English as an official language, being able to speak clearly in English is beneficial. You can communicate more easily with locals or interact more effectively with other tourists who also speak English. If there’s an emergency, it’s important that authorities or emergency personnel can understand you clearly in order for you to get the help you need. You can also confidently ask for directions or help without worrying about people not understanding you.

Being able to speak and knowing you won’t be misunderstood is a great boost of confidence. For many who struggle with their English accents, speaking up can feel quite scary and intimidating. It can be a matter of embarrassment or fearing judgment or discrimination (which one should never have to face, regardless of one’s accent). With effective accent reduction, students are more likely to participate in class, employees are more likely to express ideas at work, and people feel more comfortable speaking up in general. You can feel confident that the people you’re speaking to are focusing on what you’re saying, not how you’re saying it, and you know that you’ll no longer have to spend time repeating yourself.

Not only does accent reduction help with your pronunciation or speaking skills; it also helps with listening skills and understanding those around you. While learning how to pronounce certain words and phrases with a more neutral accent, you also learn to hear and pick up on sounds that might have previously been indistinguishable from you. Furthermore, the newfound ability to distinguish between these sounds allows you to start learning to form them yourself.

Different accents are a nod to how truly beautiful the human experience is and that people from various corners of the world are able to communicate with each other in their own style. But when being misunderstood or a lack of confidence in speaking becomes an obstacle in your life, it’s beneficial to consider accent reduction.

With ELSA, a variety of game types covering a wide range of topics are designed to keep your learning process fun, challenging, and up-to-date. If you find yourself excited about the idea of any of the four points above or can think of one of many other reasons why accent reduction would be beneficial to you, don’t hesitate to visit ELSA or contact someone at [email protected] with any questions.

ELSA partners with IMAP to educate millions in Vietnam

ELSA Corp. has entered into a partnership with one of the most prominent private English…

What a year! 2021 has seen tremendous growth at ELSA. We are now a community…

Students of any age groups learning new languages in new cultures are often self-conscious. However,…

A guide to Lunar New Year 2023 around the world